The month of May means a lot of things to people.

Spring is in full swing and the promise of summer is just around the corner. The weather is getting real nice and kids are counting down the days before school ends. For local fisherman, it means primarily one thing—cobia season!

The very exciting, sometimes frustrating, brown bombers move in to the sounds and offshore reefs and—until lately—the region offered the finest cobia fishing to be found anywhere on the East Coast.

The Broad Creek and the Port Royal Sound to the north of Hilton Head had, at one time, been crowned the cobia capital, bar none. Over the years, that area has suffered a heavy decline in supply, to the point where even catching one has become difficult. It’s probably no coincidence that the booming population (people), in addition to the easy access (you could fish a jon boat in Broad River), has overwhelmed the stock to the point that the Department of Natural Resources has closed the inshore fishery down. You may still catch cobia, if you’re real lucky, but you can keep zero.

This has tempered my anticipation of May, but fortunately the offshore cobia stocks are good.

Federal regulations have lowered the possession limit to one per person, instead of two, and the season closes down on June 20th. I fear this may be too little action, as most of the boats capable of reaching the offshore stock usually carry six anglers or more. The offshore scene is quickly becoming reminiscent of the inshore scenario, as it is not uncommon to see a hundred boats at one time fishing the more popular reefs. Cobia average 40-60 pounds or more; do the math—six of those is a lot of meat. 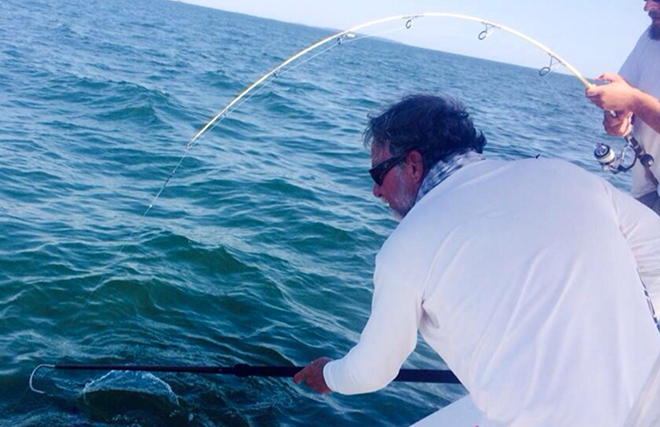 Anyone who has sightcasted one on top or hooked one blindly down deep will attest to the brute strength of the cobia. It is a great fishing feather to put in your cap and something you will want to repeat in the future, many times. Right now, the offshore stocks are great and I believe the regulations are a step in the right direction. However, I think the most powerful steps that could be taken are voluntary ones. Be reasonable and don’t get caught up in killing numbers.

Take some cobia to eat and leave the rest. Then maybe—just maybe—we won’t repeat the inshore disaster.

Captain Miles has more than 42 years of experience fishing the waters surround Hilton Head Island. Don’t miss the new Finatic boat, which can accommodate up to 12 passengers and features a special three-hour shark/dolphin eco-tour trip. Contact Miles at 843-290-6955 to book an unforgettable inshore or offshore charter fishing trip departing from Shelter Cove Harbour.