This big brown fish is the ultimate prize to reel in at this time of year. 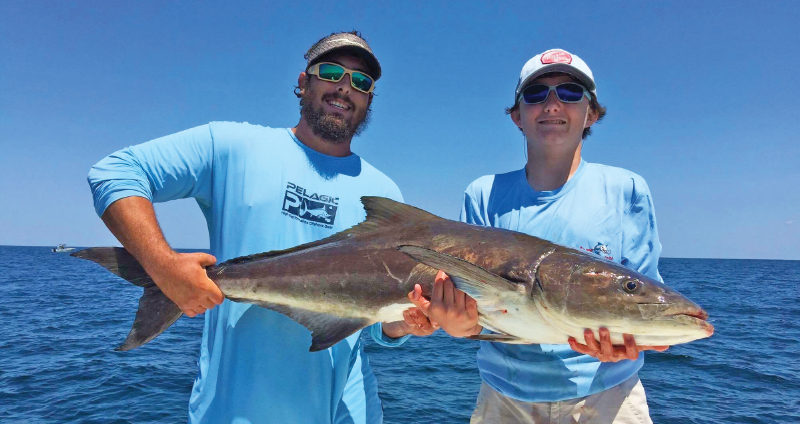 Local anglers always look forward to the month of May with eager anticipation because this time of year is the peak of cobia season.

One of the largest apex predators in our local inshore waters (only sharks and tarpon get bigger), cobia offer big game angling for the smallest of boats. Currently the South Carolina state record is 92 pounds, 10 ounces – a whopper fish by any standards. However, I have seen several fish weighing more than 100 pounds, including one last year on a reef that swam right up to the boat. Much to my despair, a “little” 65-pound fish grabbed the bait I dropped in front of him, instead of the big one I had my eye on. That was one of the few times I was disappointed to hook a 65-pound cobia!

Probably the most popular way to fish for cobia is to anchor and deploy the chum bag.

Menhaden are often used as chum and bait. Either live or dead will work. Other favorite baits include live eels, whiting, shad chunks or even a half or whole crab. Lines are generally fished on the bottom, but top water baits often score.

Another way of catching cobia is to run the buoys in the sounds and pitch bait at the buoy. This method is successful because cobia love structure. They are also known to follow large tiger sharks, manta rays and turtles. I have even caught them under floating rafts of marsh grass.

Several years ago while fishing for sailfish in Florida, I spied a huge leatherback turtle cruising the rip we had set our kites on. Sure enough, there was a squadron of cobia underneath. With the quick pitch of a bait, we had one on the line. Seconds later, a large sail snatched one of the kite baits. We had a double header on … cobia going one way and sailfish going the other!

Cobia often drive anglers crazy by turning their nose up at everything you throw at them.

Talk to anyone who has experience cobia fishing and they usually have numerous stories about days of being surrounded by fish that simply refused to eat. Last year, I had one trip where I counted more than 60 cobia swimming on the surface around the boat. We threw everything in the bait well and the tackle box to no avail. We finally hooked up one with a large live shrimp we had caught while throwing the net on menhaden that morning.

These big brown battlers are plentiful in local waters at this time of year, and you can also catch them inshore. The fight usually involves powerful line-stripping runs, occasionally accented by a jump now and then.

One thing is sure: once you’ve tangled with the “big brown,” you’ll be hooked!