The dark, sinister form appeared 20 yards from the boat, swimming lazily, but with a sense of raw power. 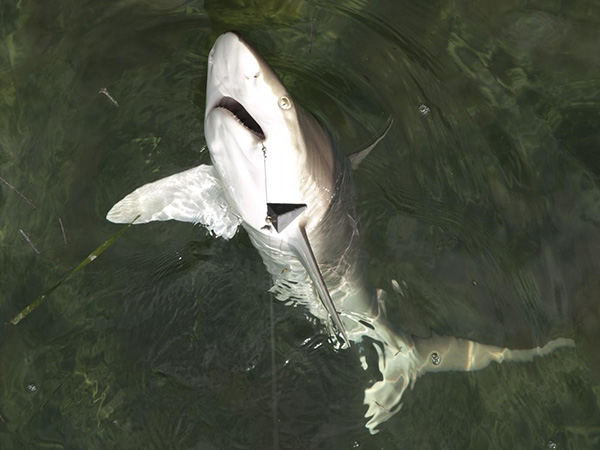 His 12 feet in length confirmed that power as he nosed up to the boat, seeking the scent of the barracuda we had hanging from the stern. The stripes on his sides, along with his size, confirmed his heritage: a tiger shark. These monster sharks are not uncommon on Hilton Head Island’s offshore reefs, offering anglers a battle that can last for hours. Of all the sharks inhabiting local waters, this one is king—a majestic sight to behold.

Closer inshore, We have numerous kinds of sharks that offer some exciting sport for young and old alike.

My personal favorite is the blacktip, often taking to the air multiple times during the fight. These highly spirited fish are remarkably beautiful. Dark brown along the back, eventually fading to a golden hue, the tips of the fins are black, hence the name blacktip.

Most of the inshore blacktips are approximately three to five feet long and weigh five to 20 pounds. Larger versions can usually be found behind shrimp boats a few miles off the beach and average 50 to 100 pounds. Use stout tackle for these guys. You have to appreciate the sheer power of these fish when they erupt just a few yards behind the boat. They rise like a cruise missile, launched from a submarine 10 feet in the air.

Probably the most common species in the waters of Hilton Head Island are the bonnet heads (also known as “bonnies” or scalloped hammerheads) and the Atlantic sharp nose. Both are lean, pure muscle and lead you to believe your fish must be at least twice its actual size.

Plentiful and abundant in the summer, it’s not hard to catch double-digit numbers of these sharks in August. They can be found in area creeks and sounds, making them available even for smaller boats. These sharks offer plenty of sport for the more economical three-hour charters offered by most of the local charter boat companies.

The list of sharks living off our shores goes on and on. These include lemons, bulls, fine tooth and duskies.

There truly is a “monster” to fit any budget or age during the dog days of summer. Catch a three-foot bonnet for the kids or a 12-foot tiger for dad. Our local waters offer great sport for a memorable Hilton Head Island charter fishing trip. Create memories that last a lifetime!