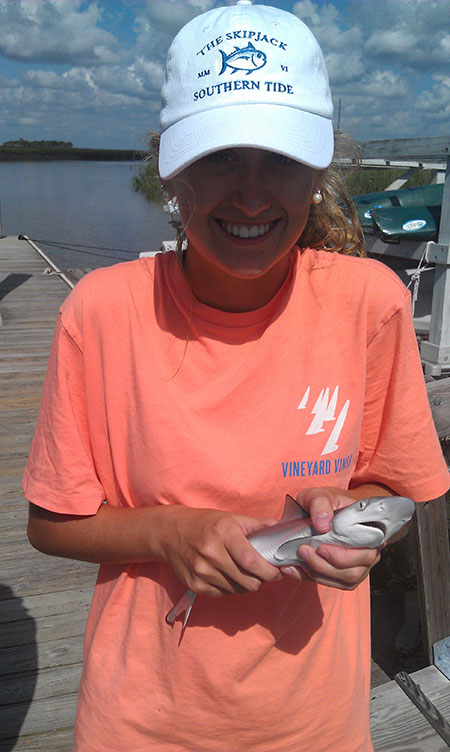 In South Carolina, sharks happen. One of the most common shark species caught in the area is the sharpnose shark. They are a year-round resident of Hilton Head beaches and estuaries. These are fun fish to catch for people of all ages due to their minimal size.

Atlantic Sharpnose sharks, Rhizoprionodon terraenovae, are found in warm and tropical waters from Canada along the coast to Brazil. They are considered small sharks, reaching lengths of up to three and a half feet. They are very pretty sharks found in variations of blue, olive, brown and shiny grey. Like many other sharks, their skin feels like fine grain sandpaper. They have a flattened and long snout, which is where their sharpnose name is derived from. The ends of their pectorals are trailing white, with black tips on their dorsal fins. They are one of nature’s perfect designs, also known as being parabolic, meaning that their fin points are equally distant from each other. They have up to 25 rows of teeth on both their upper and lower jaws.

Sharpnose can vary on their water depth and near shore territories. They are found of off sandy bottom beaches as well as our local estuaries. They have been found in water depths up to 920 feet, but they commonly spend their time in waters under 32 feet. These sharks have a great adaption to low salinity in water, but are not found in freshwater. During the winter months sharpnose sharks travel off shore to deeper waters. They then return inshore during the spring to reproduce.

Sharpnose sharks are a varietal species that give live birth to their young. Females have placental sacks that provide nutrients to the pups during gestation. They breed in near shore waters, once pregnant, they move off shore for their 11-month gestation period. The females then return inshore to give birth. They will have between four and seven pups each, which are a foot long when born and continue to grow up to two inches per month. Sharpnose sharks will reach maturity after two years and have been known to live up to 12 years in the wild.

These sharks eat small boney fish. They will also consume worms, shrimp, crabs and mollusks in our shallow near shore waters. Fishing from docks, it is fairly easy to catch them using shrimp or mullet as bait. Just remember to wear gloves when unhooking them to avoid encounters with their sharp teeth. Humans catch sharpnose in abundance, harvesting them as food. This species is abundant in number and, therefore, on the least concern section for conservation.

The H2O Nature Center is a great place to spark curiosity and inspire learning in all ages, offering eco adventure tours and live alligator exhibit. To make reservations for the Alligator and Wildlife Tour, please call (843) 686-5323. For details on other water activities offered by H2O Sports, visit www.H2OSports.com.