Roseate spoonbills are becoming a more common sight throughout our Lowcountry marshes. 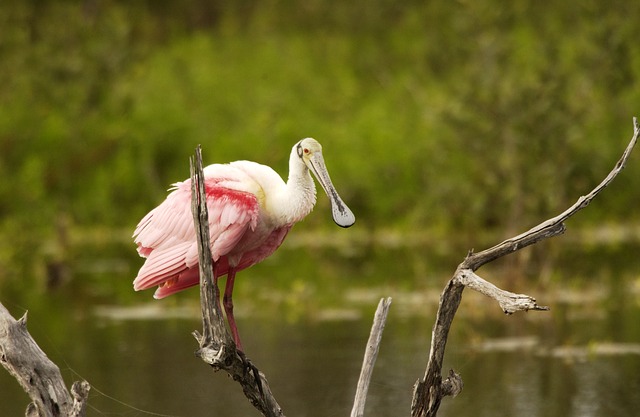 They can commonly be spotted around low tides in our marshes, beak down in the water, looking for food. They are a beautiful sight with their pink feathers and distinct bill.

Roseate Spoonbills, Platalea ajaja, almost disappeared from the United States by the 1860s. They were over hunted for their beautiful plumes. Desecration of their natural wading and nesting environments contributed to their declining numbers in the early 1900s. Once preservation efforts were set forth, the species was able to successfully recolonize the Florida and Texas coasts. By the early 20th century, their population bounced back and has slowly spread back across the coastal Southeast.

The state of South Carolina has happily seen an increase in roseate populations over the years.

They come into our coastal area in the spring and stay through the summer, foraging and nesting in our Lowcountry marshes. Keep an eye out for them in our marshes at low tide and nesting on Pinckney Island in the late spring months.

Roseates are easy to identify. They have a white head and neck, with light pink wings that have bright pink borders. They also have long pink legs. From a distance, you may think you are looking at a flamingo. Their bill is long and flat with a round spoon shape at the end. They can grow to be two and a half feet tall with a wingspan of up to five feet.

They prefer to live in lagoons, marshes, mudflats and mangrove habitats. In South Carolina, they are most commonly found in our marshes and may be mixed with other large groups of wading birds. They will forage for food in shallow waters of both fresh and saltwater habitats. Their large spoon- shaped bill offers them a great advantage while feeding. Roseates will sweep their slightly open bills side to side in the water, detecting small fish, invertebrates, shrimp and crabs by touch.

These birds will nest in large colonies, with individuals of their own species, as well as other wading birds. 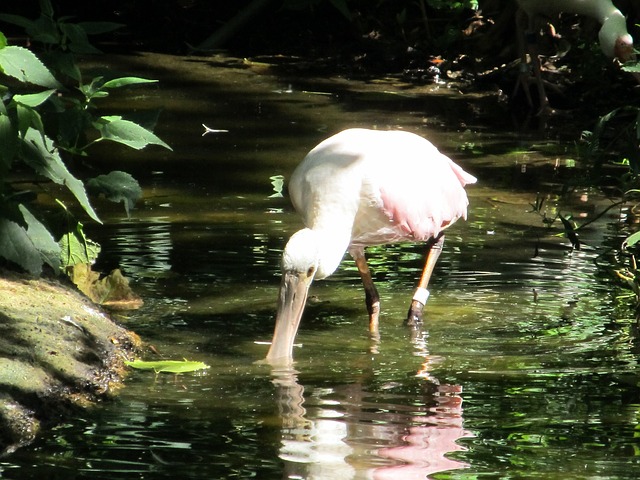 They have been known to nest in the Wood Ibis Pond area of Pinckney Island. Courtship between a pair begins when they are at least three years old. The preliminary wooing appears to be an aggressive interaction. They then begin to perch closely to each other once a connection has been made. The final courting ends with nesting sticks being presented to one another. Once the bond has been made, the male will gather nest materials, while the female builds the nest.

Their nests can be made in willows, mangroves, low scrub or cedars, but are generally all over water. The nest is a large bulky platform with a hollow in the center for the eggs. Once the nest is complete, the female will lay two to three eggs. The pair will take turns incubating the nest for up to 24 days. Both mother and father will take turns bringing food to the young, who may begin straying slightly from the nest within six weeks. They will start to fly strongly at about eight weeks.

H2O Sports is a great place to spark curiosity and inspire learning through adventure in all ages, offering eco adventure tours. To make reservations for the Alligator and Wildlife Tour, please call 843-671-4386. For details on other water activities offered by H2O Sports, visit www.h2osports.com.