Lowcountry marshes are vibrant places in spring and summer. 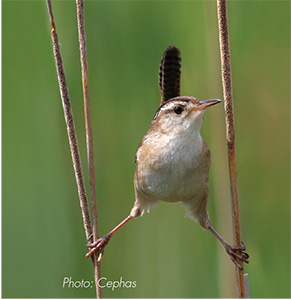 The beautiful bubbly song of the Marsh Wren adds to the majestic nature of our environment. Keep an eye—and an ear—out for these abundant small marsh birds.

Marsh Wrens, Cistothorus palustris, are small brown-and-yellow birds with thin bills, a dark cap and white eye lines that tend to hold their tails upright, much like the common Carolina Wren. Weighing up to .5 ounces and growing up to five inches long, they make short flights throughout our Lowcountry marshes, but are more commonly seen jumping through the grass tips, as they maintain their territory and care for their young.

Spread throughout most of North America, Marsh Wrens are usually found in freshwater, saltwater and brackish marshes. Considered migratory throughout the majority of the United States, they can be found in our area year round. Marsh wrens are most notable from March to August due to their high frequency of vocalizations, which coincides with their breeding season. Although still in our area during the fall and winter months, they are much less noticeable.

Their main diet consists of insects of all kinds, including larvae, spiders and snails. They forage in dense growths of spartina grass (marsh grass) for insects that cling to the stalks and also catch prey in the air with short, fast flights over the surface of the water.

At the beginning of the breeding season, a male declares his territory through song.

He then continues to defend his territory by singing at rival males. To lower the competition, males poke holes in the eggs of other wrens, as well as other varietal bird species. Within his territory, a male may build up to 20 different nests—oval shaped baskets made out of dead wet grasses woven into the stops of the marsh grass. These nests usually have a side door entrance for camouflage and efficiency. Very few of the nests will be used to rear young, but often stand as decoys for predators or used by adults during non-nesting seasons.

A male wren sings to entice females into his territory.

Marsh Wrens are not monogamous and may have two or more partners at a time. Upon a female’s arrival, the male will show her each of the nests within his range. A female chooses a male after accessing his territory, nests and the competition of other females. She then selects her favorite nest and lines it with grass, plant down and feathers.

After laying four to five brown-speckled eggs, the female incubates the eggs for up to 16 days. Once hatched, both parents forage to feed the young. After another 16 days, the newly hatched chicks leave the nest. A single female will have up to two broods a year. 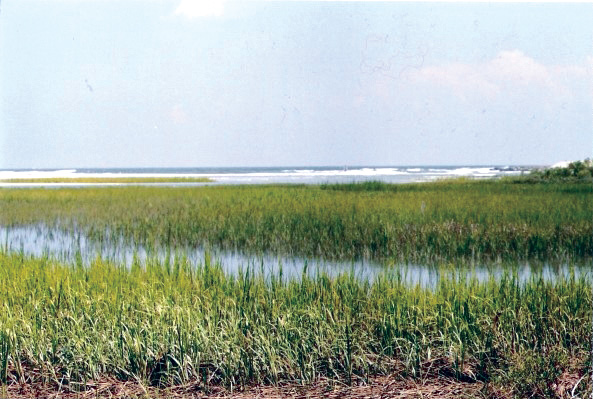 Marsh Wren numbers have been increasing since 1966. They are considered a species of little concern, other than within the state of Michigan. They can be highly affected by habitat destruction due to pollution or construction. Maintaining marsh habitats is vital for their survival and these birds will happily inhabit restored wetlands.

H2O Sports is a great place to spark curiosity and inspire learning through adventure in all ages. To make reservations for the Alligator and Wildlife Tour, please call 877-290-4386.