Calm seas and fiddler crabs bring in plenty of sheepshead on a recent fishing excursion. 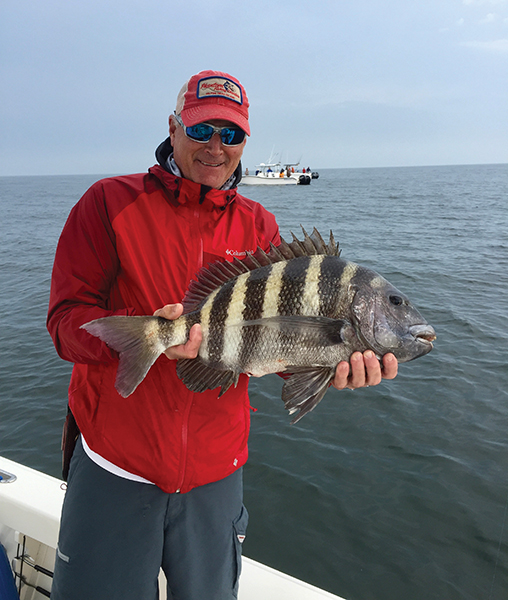 Too many slick days had passed by and I felt restless, especially as I crossed the bridge over Skull Creek.

Gazing down Calibogue Sound over the mirror calm water, my mind would finish the journey around South Beach into the Atlantic Ocean where a few short miles offshore lays a sunken barge. Sitting in 35 feet of water, it’s home for a variety of fish, but foremost on my mind was the sheepshead. Sheepies are here year-round and are often sought around bridges and pilings. Late winter through spring, the larger ones congregate around structures off the beach. For me, the season traditionally kicks off with some offshore sheepshead fishing.

The forecast called for the wind to howl for a few days then lighten from the NNE and swing around to the SE.

Translation: calm seas. I made the call to my brothers, Don and Scott. We rounded the corner of South Beach on a brisk morning to a light chop and soon found the structure on the depth sounder. On the chart, the barge rose seven or eight feet from the bottom, and the marks promised live action.

My nephew Nick was the first to drop a fiddler and scored first fish with a frisky sea bass. As usual, we had to catch quite a few of the black sea bass before the sheepshead had a chance at our fiddler crabs. The seas continued to calm and Scott scored the first sheepie – not a huge one but a sheepie nonetheless.

Sheepshead are the master thieves of the saltwater world.

Armed with rows of teeth similar to sheep, hence the name, they lightly take the crab in their mouths and crush, sucking the crab down and leaving you with an empty hook. By the time you feel the bite – if you feel it – it’s often too late. Nick followed his Dad and bowed up on a nice sheepshead around four or five pounds. Now we had two nice fish in the box.

I had picked up a new Penn Spinfisher V SSV 3500 and loaded it with Spiderwire 20 lb. braid the night before. The newest version of a proven reel comes with all kinds of upgrades. It was watertight, including the Slammer drag system, and I was anxious to try it out. Not having time to rig up the night before, the boys had a 15-minute head start on me and I was tied with Don for last place. I grabbed a fiddler and sent it to the bottom. After a few minutes, I felt a slight tug and bowed the rod up.

Halfway to the surface the sheepshead put it into overdrive.

He pulled my rod tip into the water. The smooth drag sang as he battled his way back to the bottom. Several repeats of this scenario and Nick slipped the net underneath the six or seven pound sheepie. The bite may be light, but the fight is intense with these brawlers.

Don was having one of those cursed days. Numerous stolen baits, pulled hooks, broken hooks, you name it. He just couldn’t hit the scoreboard. Between the rest of us we had 10 sheepies in the box. About that time, I threw a 23-inch black drum in the boat, a cousin to the red drum. This guy tested the new reel to the max, making several searing runs. The clock was running out on this trip when Don suddenly had a solid hook-up.

After a spirited skirmish, Nick slid the net under a nice six pound sheepshead, and Don had redeemed himself with second biggest fish in our perpetual brothers’ tournament. Aside from the great sport these fish offer, the best part is how they have earned the nickname “river snapper.”

The sweet white flaky flesh is beyond compare in my book. Shortly before I started telling this story, I enjoyed another tradition: eggs over easy with grits and lightly breaded “river snapper” fried in bacon grease.

I’m getting restless again just thinking about it.