Bull reds are plentiful in Lowcountry waters in October. 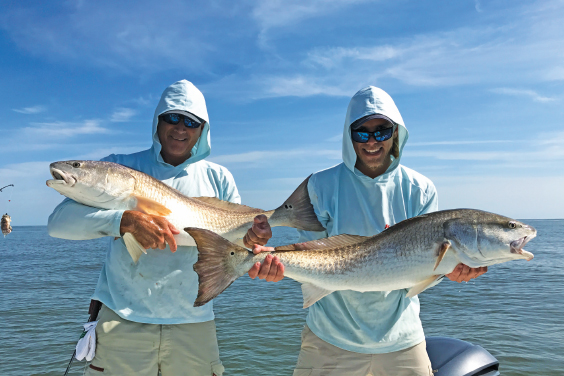 Twenty-five feet below the surface, a marauding school of bull reds swept the sandy bottom in search of prey. Honing in on the smell of fresh-cut mullet, a large bull inhaled the chunk and, upon feeling the bite of the 8/0 circle hook, put his broad shoulders and tail into high gear.

Twenty-five feet above the bottom, on board the Phantom, the medium-heavy spinning rod bucked. It then bent double as the reel drag started singing that song all anglers love to hear — line disappearing off the spool at a high rate.

One of the bright spots in our local fisheries is the impressive comeback of the red drum. Years of tight restrictions and increased mariculture efforts have resulted in one of our most prolific fisheries. Known by many names, including spottail bass, redfish (smaller ones) and bull reds (bigger ones), the red drum offer some of the best sport fishing for Lowcountry anglers, regardless of whether they are land bound or boaters.

Bull reds make two strong runs a year, in April and in the fall, usually September and October. During these times, catching double-digit numbers of 20- to 40-pounders is not uncommon.

An occasional bull can be caught anytime of the year — and the smaller ones are here all year long too — but nothing can compare to the spring and fall.

On the Phantom, I like to use medium-heavy spinning rods with 40-pound braid. I fish a fairly tight drag. Letting the battle wear on with lighter stuff increases the recovery time and the mortality of the released fish. Multiple hookups are fairly common, creating a Chinese fire drill on board as anglers strive to keep the strong fish from tangling.

It’s great fishing the big bull reds, and the time is now!

Capt. Miles Altman of Bayrunner Fishing Charters has more than 42 years of experience fishing our waters. Don’t miss the Finatic boat, which accommodates up to 12 passengers and features a special 3-hour shark/dolphin eco-tour. Contact Capt. Miles at 843-290-6955 to book an unforgettable inshore or offshore charter fishing trip, departing from Shelter Cove Marina.