For locals and visitors alike, Hilton Head offers all kinds of great activities.

Biking, concerts, fundraisers, restaurants, tennis, shopping and much more. One activity that is often overlooked is exploring Hilton Head’s historical and culturally significant places. Many different people and cultures, all of which left their mark here, have called our island home. Most of these sites are off the regular circuit of attractions, but take the time to seek them out and you won’t be disappointed.

On the north end of the island, off of Squire Pope Road, sits Green’s Shell Enclosure.

At first it is not much to look at, a hill on the land, which is dotted trees and brush. This hill is in fact a circular ring of shells and other materials. Archeologists have dated this site to the mid 1300s and it is evidence of sedentary habitation of Native Americans on Hilton Head. Green’s is only one of roughly 20 such sites on Hilton Head.

Native Americans set up a little town at this site, evidenced by postholes from homes no longer in existence. The ring was developed around the town as the result of collected kitchen refuse being essentially dumped there. This makes shell enclosures a fantastic resource for understanding how these civilizations sustained themselves. In the shell enclosures archeologists found remains of oysters, clams, shrimp, fish, sharks, rays, raccoons, deer and hickory nuts.

Native Americans had established towns on Hilton Head. They develop systems for hunting, foraging and growing food, and routes for traveling by dugout canoe. About 200 years after the Green’s Shell Enclosure settlement began, Europeans found there way to our island. Explorers from Spain, France and England all visited the island before the first continual inhabitation by settlers in 1663. The next half a century was rife with Indian wars. It was an extremely tough life for settlers battling snakes, bugs and heat. By the late 1700s, Hilton Head had entered the Plantation Era. Cotton, indigo and rice were all grown, thanks in large part to slaves from West Africa.

One such plantation was what is now called the Stoney/Baynard Plantation, the site of which still holds many fascinating historical highlights.

The Baynard Ruins are located in Sea Pines on the South End of Hilton Head. You will definitely want to get directions and a map to this site, because it is rather hidden in the woods. At the site you will find remnants of the main house, slave quarters, overseer’s house and the chimney from kitchen building. These structures are made out of tabby, which is a type of building material made up of oyster shells.

Also on the Baynard site is evidence of the next phase of Hilton Head history, Union occupation during the Civil War. After the battle of Port Royal in 1861, Union troops set up camps on several sites on Hilton Head, including Stoney/Baynard plantation. Today, you can see remains of tent bases that were constructed to keep the troops’ tents off of the wet ground.

After the Civil War, Hilton Head entered a most fascinating period generally referred to as Reconstruction.

Former slaves that did not abandon the island, established the town of Mitchelville. They formed a social system of cooperative economics undergirded by tight-knit, religious-oriented, extended families. This community had strong values, and at the top of the list was religion followed closely by education. At first young people were in fact educated in the St. James Baptist Church. Then, in 1937 when the Cherry Hill School House was built. This building is the only one-room schoolhouse to exist on the island. It still stands in its original location today at the corner of Dillon and Beach City roads.

The Cherry Hill School House was built with cooperation of the Beaufort County, only after the community members banded together to purchase the land for it to be built on. Fittingly, this land is directly across the street from the St. James. The schoolhouse is built of wood fell on the mainland and brought over by boat. It was used as a public elementary school from 1937 to 1954. When modern development began to creep in and later boomed with the opening of the first bridge to Hilton Head in 1956. A few remaining students of this school still live on the island and are referred to as “The Gullah Elders.” It is through them, and rich sites like Cherry Hill, that we can learn this unique period of Hilton Head history.

To understand the history of Hilton Head it is imperative to seek out the subtle places that reveal themselves gradually through their rich artifacts. Whether you are a long time resident or first time visitors, get out and explore! 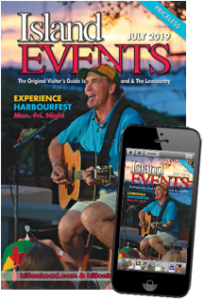 FREE at more than 350 locations on Hilton Head Island and the surrounding area. The guide provides a comprehensive view of what Hilton Head Island has to offer in the way of shopping, dining, activities, and events. If you would like to preview Island Events before your arrival, you can view the guide online. 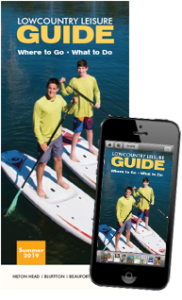 FREE at more than 350 locations in the Hilton Head Island, Bluffton, Beaufort and Savannah areas. The guide provides a comprehensive view of what these locations have to offer in the way of shopping, dining, activities and events. If you would like to preview the guides before your arrival, you can view the guide online.