Golf on Hilton Head Island is something special. 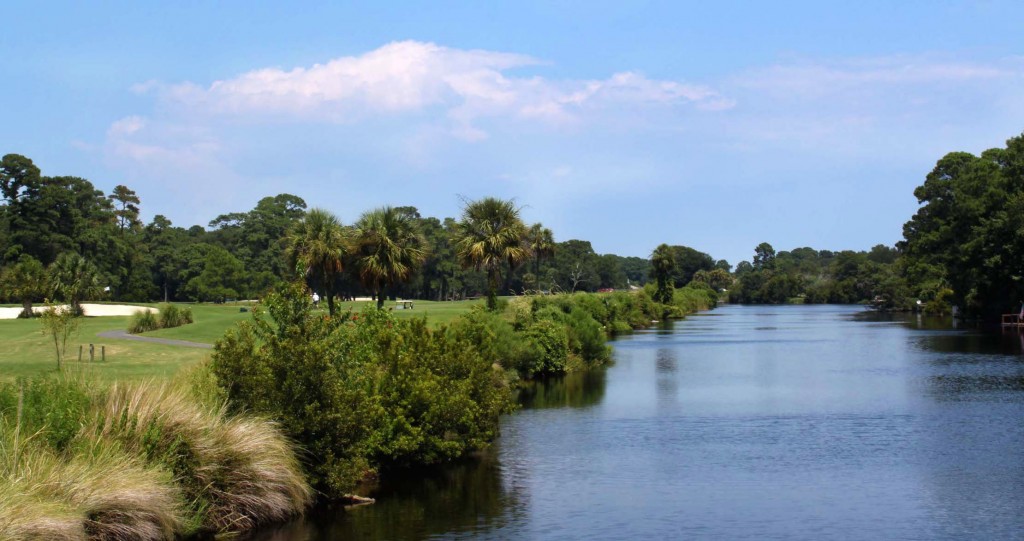 Not only does Hilton Head host the PGA Tour’s RBC Heritage at the Harbour Town Golf Links, but the island also has a multitude of resorts, each with their set of courses presenting different challenges. With over 50 courses in the surrounding areas and over 20 courses on the island alone, there’s no shortage of golf on Hilton Head Island.

This 72-par course features 6,804 yards of tight, bunkered fairways with winding doglegs surrounded by tall pines and beautiful lagoons. It was Rees Jones’ first solo design in 1980, which was completely renovated in 2006. The layout favors the shotmaker with bunker-filled fairways twisting around trees and water hazards and the 419 Tifway Bermuda and super dwarf TifEagle Bermuda greens. Guests interested in playing at the private course should inquire about their “member for a day” program.

Also in Hilton Head Plantation is Rees Jones’ 6,919-yard, 72-par course at the Country Club of Hilton Head. With 14 doglegs, water on 16 holes and the highest point on Hilton Head Island on hole 12, this course makes for an enjoyable game meandering through marshland and canopies of pine and oak trees. The course has 12 greens that back up to Skull Creek, which presents a breezy challenge to golfers. In 1999 and 2005, the Country Club hosted the U.S. Open Qualifier.

Gary Player and Ron Kirby designed this course in 1974. One of the first courses on the island, Hilton Head Plantation owned this semi-private course until 1983. Then, Dolphin Head Golf Club took over, redesigning it with new greens and bunkers. Players will find a great view of Port Royal Sound on the fourteenth hole and gusty winds that will even affect the back nine holes. But that’s not the only challenge! Water hazards on 13 holes and undulating greens redesigned by Clyde Johnston in the 1990s will test players’ putts.

Jack Nicklaus designed this course in 1993 with sand traps and water hazards to keep things interesting during games on this leisurely course. Players are challenged with a strategic game rather than one that relies on power at this course surrounded by canopies of oak and pine trees. And if the rest of the course doesn’t impress you, then the last three holes will, especially if you’re finishing your game up around sunset.

Moss Creek doesn’t just boast one Fazio golf course, but two. These courses, which opened in the 1970s, were designed by Tom and George Fazio with tight greens. North is a shotmaker’s course with short elevated greens surrounded by water, which make it considered the easier by some. South keeps the tight greens, calling for exact shots, all the while showing off the Lowcountry, sweeping along the Intracoastal Waterway and Mackay Creek. But don’t get too distracted by the beauty because this course can be a beast too.

This Rees Jones course has a clever layout that challenges golfers with doglegs, strategically located mounds, more than 65 bunkers and winding lagoons. Its signature hole, number 6, gives players a beautiful view of Port Royal Sound and challenges them with breezy winds. The par-3 sixth is the course’s signature hole, but the finishing five are also course favorites. 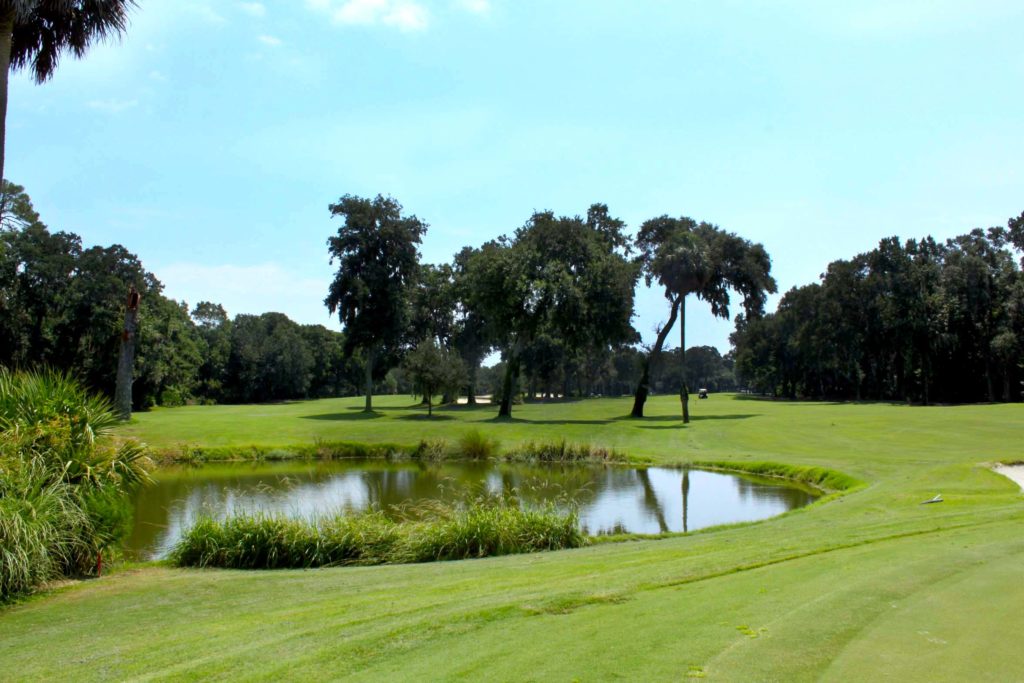 With three golf courses and a resort all to itself, Palmetto Dunes has everything you need for a great golf trip. The scenic Robert Trent Jones Oceanfront Course boasts generous fairways around lagoons. The narrow George Fazio Course challenges players with small greens and tight shots. Players get caught in in bunkers along the tree-lined Arthur Hills Course. Jones is the oldest course and Fazio, the only par-70 on the Island.

Along with an Arthur Hill Course, this golf club offers guests the chance to play on the Robert Cupp Course. This “Hills Course” isn’t actually accentuated with hills. Instead is quite level, creating a challenge for players that aren’t familiar with the course. In addition to hidden bunkers and water hazards, the Hills Course also has several fairways and greens framed with mounting and thick trees that force golfers to shape their shots. The Cupp Course, which opened in 1993, challenges players with straight lines, sharp angles and unusual slopes. It features water hazards on more than 13 holes, over 40 sand traps, rolling fairways and dramatic mounding that carries balls away from their targets. With a good variety of hole designs, the course proves to be tough on the scorecard.

With three courses all designed by different golf aficionados, Port Royal challenges golfers in several ways. Barony, designed by George W. Cobb, is the most expansive of the three. Its special back nine challenges players with doglegs and interesting layouts. Cobb’s second course, Robber’s Row, updated by Pete Dye in 1994, requires accuracy unlike the others. It boasts four par-three holes full of water hazards and greens surrounded by bunkers. But it’s the youngest that proves to be the most difficult at Port Royal. William C. Byrd’s Planter’s Row, built in 1984, challenges golfers with very narrow fairways and a landscape unlike the others, with no houses lining the course and water on 10 holes. 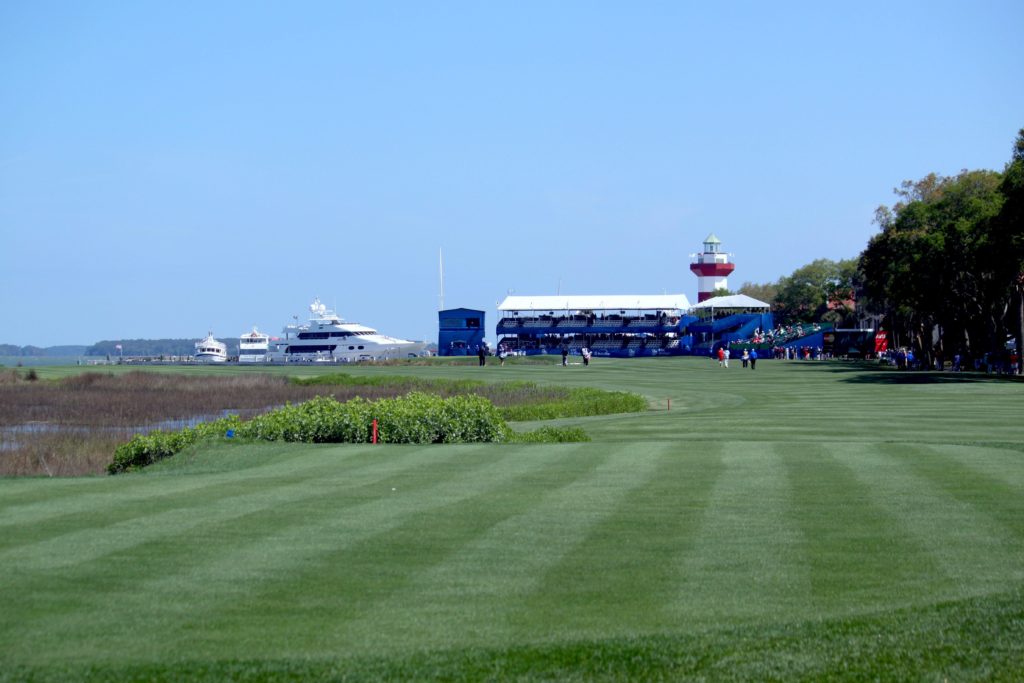 Sea Pines Country Club is the only truly private course in Sea Pines. Arnold Palmer and Frank Duane designed the course in 1960. Clyde Johnston revived it in 2001 with undulating fairways, bunkered greens and water hazards. It measures 6383 yards, from the longest tees and has a slope rating of 133.

With three nine-hole courses, Shipyard presents a unique round of golf. It allows players to choose a combination of courses to create their own 18-hole course. George W. Cobb designed and built the Clipper and Galleon courses in 1970. Clipper is the most difficult because its heavily guarded greens require accurate placement. Williard C. Byrd’s Brigantine Course came in 1982 with water hazards on every hole. It also offers doglegs and well-placed bunkers that create a shotmaker’s course.