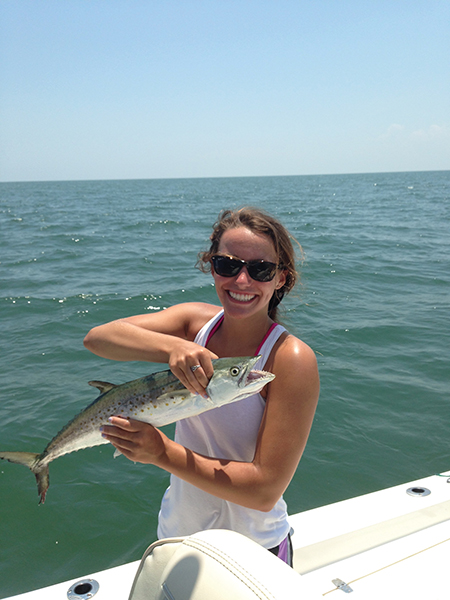 “I’ll be on Hilton Head next week and would like to charter you to do a little fishing,” Doyle Evans said in his thick Oklahoma drawl.

Doyle and I had become friends years before, but had never pulled off a fishing trip together.

“How ‘bout some fast action, with big fish on light tackle?” I asked.

The next week, we departed on a beautiful morning. Sunshine and calm seas lay before us as we headed for a nearshore reef. We made a quick stop to throw the cast net on some menhaden, filled the live bait well and resumed skimming across a glassy ocean with a gentle swell.

One of summer’s top targets for Hilton Head’s charter fishing fleet and recreational anglers alike is the Spanish mackerel.

These roaming marauders of local waters are sleek, streamlined predators that forage on the bait schools around the sandbars and reefs. Beautiful fish, they have an olive green back that fades to iridescent silver sides, with round golden spots that run along the body. Like all mackerel, the Spanish mackerel has a forked tail that screams speed.

This formidable fish is also armed with a mouth full of teeth, making it a very efficient predator. That’s precisely why we were using light wire leaders on our rigs that day. Traditionally, Spanish mackerel are caught trolling, usually with a long leader and a small spoon, such as the Clarkspoon, with a weight or a small planer in front of the leader.

Flocks of seagulls and terns diving on the baitfish, or the results of the carnage of the mackerel school beneath them, make spotting the mackerels’ location easier. The spoons are then trolled around the fringe of the school so as not to spook them.

That day, however, we were doing it differently.

We dropped the anchor alongside the reef and deployed the chum bag. The water was clear, and the bait schools were soon evident behind the boat as they came to the chum bag.

I put a live menhaden on a small treble that had another “stinger” treble a few inches behind it. Doyle dropped it 10 feet behind the boat, and the show started!

A half-dozen Spanish mackerel blitzed the livey, and the light Shakespeare Ugly Stik 12-pound rod bent double as the drag sang on the reel. After several scorching runs, a nice five-pound Spanish mackerel hit the deck.

Doyle grinned. “Like fishing in an aquarium,” he remarked.

And it was. We repeated this scenario over and over, sometimes dropping the bait right beside the boat. High-speed Spanish mackerel came from every direction to attack the hapless bait.