An adventure off the coast of Hilton Head Island offers anglers the ultimate fish story.

We were having fun at the nearshore reef, catching bluefish, summer trout and blackfish on light tackle when, all of a sudden, the small Fin Nor spinning reel- started screaming as line rapidly disappeared off the spool.

It didn’t take but a second to figure out the anchor had to come up quickly, as the couple hundred yards of braid was almost gone. With the anchor up, we proceeded to chase the fish, angler in the bow reeling frantically to get the line back and to maintain a standing position as we bounced through the waves.

Literally hours passed as the seesaw battle ensued, much to the chagrin of the angler’s companions, as they spent the bulk of their trip watching him battle his huge fish. Finally, after a couple of hours, the angler was able to lift the fish near the surface, and we were able to ID the culprit. It was a huge jack crevalle, and he was nowhere near giving up. 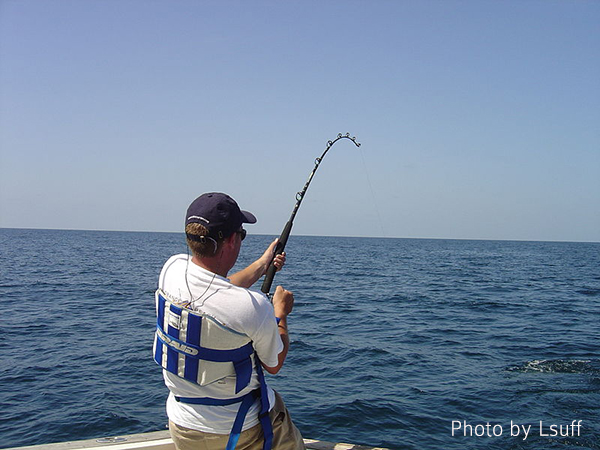 The angler groaned as the line disappeared again, when the large jack dug in and made another blistering run. We were now in overtime.

We came up with a plan to work the fish back to the surface. At that point we used a billfish tactic by charging him, using the boat and grabbing the leader. After several unsuccessful attempts, the third time was the charm, and we boated a 37-pound jack crevalle!

Trust me, everyone was happy for that battle to be over.

We snapped a few pics and released a slightly tired jack.

The jack crevalle is a fairly common fish in our waters and is usually plentiful in summer. The big bruisers, usually in the 20-40 pound range, are often seen in big schools cruising on the surface. They are quite spooky and fast-moving, so one must be stealthy when sight fishing.

Either live bait or artificials will get the job done, but they must be placed far enough in front of the school to not spook the fish. However, the school often swims as erratically as it does fast.

Medium to heavy tackle is recommended for these bulldog battlers…unless, of course, you have hours to spare.