Shannon Tanner has been entertaining summer crowds on Hilton Head Island for over 30 years. 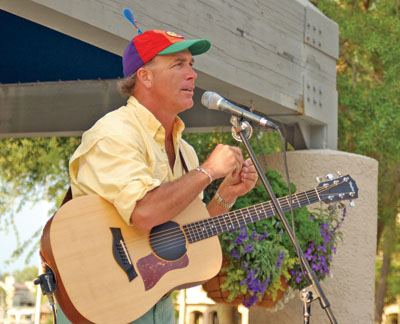 Shannon Tanner delights his audiences with his unique blend of ’60s standards, sing-a-longs, original ballads and children’s favorites. His Summer Family Show at the Gazebo at Shelter Cove Harbour has become an annual highlight for families visiting the island each year.

Wearing his trademark beanie hat and strumming the guitar, this popular singer/songwriter creates priceless vacation memories. Countless children who have joined him onstage each summer. Over the years, Tanner has performed live with a range of top artists. These include The Beach Boys, Amy Grant and America. He has  also entertained notable guests including President Gerald Ford and Vice President Dan Quayle. He has toured through Australia, Southeast Asia and South America, where his fun-loving shows have been well-received. His performances at Shelter Cove Harbour, however, hold a special place in his heart.

Originally from Ridgeland, South Carolina, this accomplished musician played piano and drums as a child.

Influenced by the music of Jim Croce and James Taylor, Shannon Tanner learned to play the guitar by ear, practicing whenever he got the chance. As a teenager, he helped out in the summer on his stepfather’s shrimp boat, which was docked at Hudson’s Seafood restaurant. One night.  After he finished his work, he played his guitar and, much to his surprise, attracted a crowd of tourists. That experience started a legacy which continues on at Shelter Cove Harbour today.

Shannon performs two 1-hour shows nightly at 6:30 and 8 p.m. Shows are free and parking is plentiful!