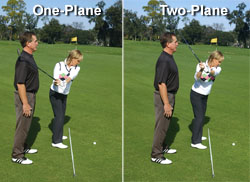 You’re mentally drained from trying to figure out which of the three-dozen tips you’ve read recently is the right one for getting the club squared to impact. You’re ready to pull out your hair after coming across yet another piece of advice on the proper swing arc that directly contradicts the one you memorized two weeks ago.

The easiest way to embed a consistent, effective swing path is to break it down.

Two types of swings are in fashion today – the two-plane and the one-plane. Until recently, almost all professionals used a two-plane swing, involving a fairly erect posture, narrow stance, a level turn and a swing that brings the arms up almost vertically, on a steeper plane than that of the shoulders.

Over the last 15 years or so, swing scholar Jim Hardy has introduced the increasingly popular one-plane swing, which is distinguished from the two-plane by its physical ease and mechanical simplicity.

Both types of swings end up at essentially the same spot – square to the ball at impact. But, they get there in different ways. I’m not here to endorse one or the other. You’ll figure out which better suits you. But regardless of which one you choose, let me describe the routes.

Because they follow different paths – a two-plane swing goes straight back and over your shoulder. A one-plane is an circle that goes behind and around your chest before coming back toward the ball on the same angle. The two types of swings also require slightly different setups.

Most golfers are accustomed to a two-plane setup. It is characterized by a more erect stance. Feet squared to the target line. Weight is slightly unevenly distributed and closeness to the ball. This promotes a more upright swing.

The one-plane version features a more bent-over posture. The stance is wider and alignment is closed more. The forward foot should not square to the target line. The hands are positioned under the chin. Weight should be evenly distributed between the feet. This promotes a flatter swing trajectory.

Here’s a simple way to feel the distinction between the preliminary paths of one- and two-plane swings.