One of the most iconic birds of the Lowcountry is the great blue heron. 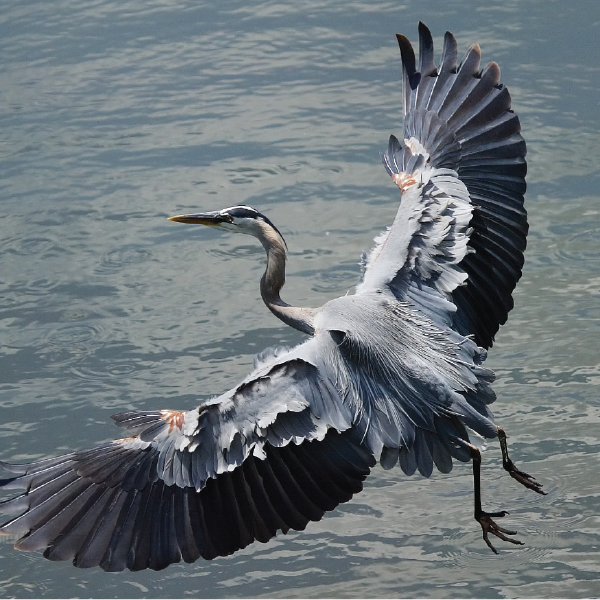 Their name reflects the colors of their beautiful plumage, just like the yellow-crowned night heron. These large and beautiful birds can be seen foraging shallow waters or gliding through our Southern skies.

Great blue herons, Ardea Herodias, are the most common and the largest herons in North America, growing up to be up to four-and-a-half feet tall with a six-foot wingspan. They have a beautiful blue-grey coloring with chestnut thighs and a white belly with a white cap that sits atop their black eye stripe. Males and females have the same coloring, but males may be a little bigger. Although they are such large birds, they only weigh up to six pounds. The average lifespan of a great blue heron is 15 years old, but individuals have been known to live up to 24 years.

Herons usually move very slowly, but when needed, can snap into action quickly.

They have been recorded at flying up to 30 mph. Their flight is very distinct; their neck curls up in a tight “S” shape while their broad and rounded wings beat slowly with their long legs trailing behind them.

Herons are wading birds, which are most commonly seen in shallow waters, so you might see them while kayaking. They are carnivores, with fish making up most of their diet, but they will also eat crustaceans, small reptiles, small rodents and insects. Walking slowly through shallow water, looking for small movements, once prey is spotted, their necks can spring at great speeds to pierce the prey, then swallow it whole. They will also stand motionless in shallow water, waiting for prey to come to them and have been known to stand still and wiggle their toes under the mud.

This process fools fish into thinking that there are worms to eat, and then the herons get an easy meal. On Hilton Head, you can see them standing on the edge of the road moving their head and neck side to side as they look straight up, which is a technique for catching insects, especially dragonflies. Great blues also help keep the alligator population in control by eating the freshly hatched baby gators.

During breeding season, which starts in April, herons will nest in colonies for safety.

Males will choose the nesting spot, usually high up in tall pine trees. They will then begin displays in order to attract a mate. Great blue herons will be monogamous during a season, but will change partners at the next breeding time. Once the pairs have been made, males will gather nesting materials, while the females construct the nest. Females will lay two to seven eggs. Both the male and female will incubate the eggs for about 30 days. They are able to fly after 60 days and will leave the nest after 90. Adult plumage develops at the age of two.

These birds live on Hilton Head year round.

Great blues can be found throughout all of North America, all the way through the northern parts of South America and heron migration is dependent on where they live. Birds that live in areas where the water freezes in the winter will migrate south during those times. The great blues on Hilton Head do not migrate. They can be found in both fresh and saltwater areas. Keep an eye out for them in marshes, ponds, streams, lakes and near shore areas.

H2O Sports is a great place to spark curiosity and inspire learning through adventure in all ages. To make reservations for the Alligator and Wildlife Tour, please call 877-290-4386. For details on other water activities, go to www.H2OSports.com.