Coyotes have been a part of Native American folklore for centuries. 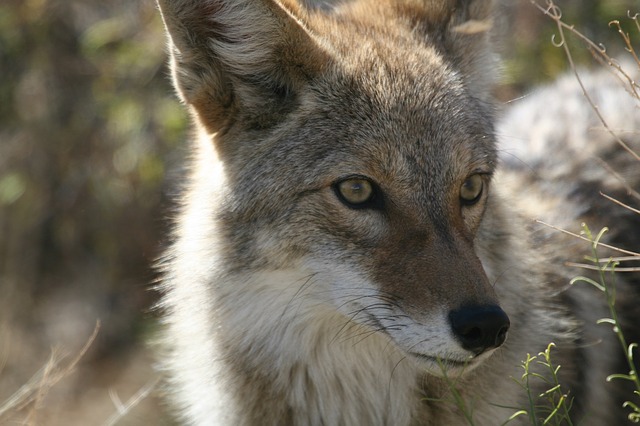 Some thought of them as tricksters, while others saw them as wise and powerful beings. They are cunning and intelligent animals whose physical ability is only strengthened by their endurance. With all of these qualities in one animal, it is no wonder that they have spread throughout the North American continent so prolifically.

Their appearance is very similar to a small German shepherd. Coyotes, Canis latrans, have pointed and erect ears with a long thin muzzle and a drooping tail. Their fur and size varies, depending on their geographical location.

Lowcountry coyotes tend to be fairly small with reddish brown hair and streaks of gray. They have short soft underfur, topped with long coarse guard hairs. In our area, they can weigh between 35-45 pounds. They are historically descendants of grey wolves, which still exist in North America today.

These animals are native to North America.

During the time that Europeans came to colonize the area, coyotes were most common in the plains and arid areas of the West. Coyotes came to the Southeast in two waves. One was by natural migration, moving either through Canada and back to the South, and the other was due to humans.

Humans transplanted coyotes into our area in order to hunt them. There are also stories of farmers, wanting to rid the nuisance coyotes from their farmlands, who drove them as far away as they could. Either way, the coyotes began the natural progression of taking over the grey wolves’ territories across the continent. It is thought that coyotes will continue to spread their numbers into Central and South America in the future. They began to make a stronghold population in the state of South Carolina in the mid-to late-1990s.

Some have a close-knit family unit, usually made up of female relatives, and others have loose knit packs of juveniles and adult males. Females tend to be matriarchs of large packs.

Although coyotes hunt alone quite often, they are most known for hunting in packs to take down larger prey. Their diet is made up mostly of rabbits, but are known to be omnivorous, as well. They will eat small rodents, insects, fruits and berries, but working as a group, they are able to hunt fawns, deer and livestock and consume one percent of the United States’ sheep population.

In the state of South Carolina, coyotes will eat 62 percent of newborn fawns.

Large numbers of fawn consumption has lowered the amount of deer South Carolinians are able to hunt. However, the number of coyotes that need to be culled each year continues to rise.

Breeding in South Carolina takes place between January and March. Monogamous pairs will be formed and they will bed down in tall grasses and brush. Females will either dig out new dens or expand already existing dens as a safe haven for the young. Female gestation periods are a little over two months, usually producing five to seven pups, but they can produce over 12. The pups will stay in the den for a month while nursing off of their mother for two months. Once they have weaned, the mother will hunt and regurgitate food for her young. Young males will leave the family by fall, while juvenile females tend to stay until spring. Average survival rate states that only one or two pups will make it to full maturity.

H2O Sports is a great place to spark curiosity and inspire learning through adventure in all ages, offering eco adventure tours. To make reservations for the Alligator and Wildlife Tour, please call 843-671-4386. For details on other water activities offered by H2O Sports, visit www.h2osports.com.