Kerry Pollock, a veteran Vegas performer and illusion designer, who along with his wife Kelly are the proud owners of the Hilton Head Comedy Magic Cabaret in South Island Square. 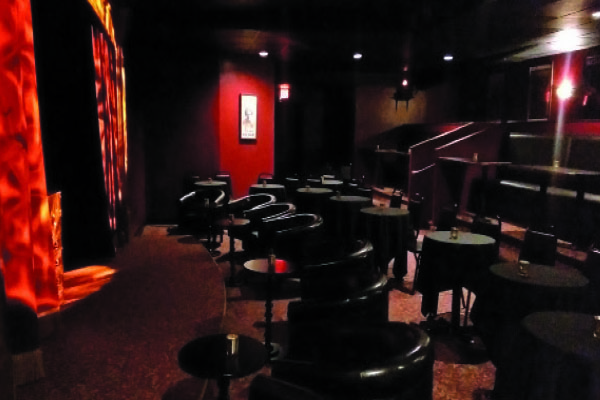 After several years above a restaurant in Shelter Cove Harbour, the couple searched for a new venue. They found one and were all was set to move, but the deal fell through. After another lengthy search, they found the ideal spot for their cozy, candlelit cabaret. They have renovated from the ground up and have been there since 2016.

Meanwhile, patrons love his “funny not filthy” material geared towards adults, but suitable for teens attending the show with their families. Relying heavily on word-of-mouth advertising from area concierges and previous guests, the Comedy Magic Cabaret currently holds the top spot on “TripAdvisor” for Hilton Head Nightlife.

Resident headliner Kerry Pollock also credits their entertainment business model for much of the club’s success.

“We don’t bring in a different comic every night,” he explains. “We’re doing it more like a Vegas show where I change the act a lot throughout a season—and even during the week—because I have a lot of material and I ad lib a lot. Then every fourth or fifth week, we’ll bring in a guest act, so we don’t have to pay two comics, lodge them, fly them in. With that formula, we can actually make enough profit that we’ll be here for a long time. If we have a slow week, I just don’t get paid as much.”

“People like it because they don’t have to guess what the show will be like if they want to bring their teenagers with them,” he adds. “They know what to expect. It’s been working great for us.”

Like the business model, the club’s menu is successful in its simplicity. It offers a selection of sandwiches served on locally-sourced bread, soft pretzels and other finger foods, plus desserts featuring Hilton Head Ice Cream. The full bar offers specialty cocktails, such as the Daufuskie Hurricane created with local rum. You may also find wine by the glass and an assortment of popular beers.

Kerry performed at Island clubs off and on for 25 years. When friends John Biddle and Mike Paskevitch closed the Hilton Head Comedy Club, the Pollocks saw an opportunity to open their own venue in the empty space.

“I like love the audiences in Vegas, but we get a good crowd here,” says Kerry. “They’ll have a drink or two, but don’t get drunk—they come for the show.”

Although “magic was a hobby when I was a kid and I always loved it,” Kerry got away from the craft as a teen. He went on to earn an engineering degree. Quitting his corporate job at 23, he then did freelance engineering design. During this time he used his captain’s license to lead parasailing charters in Lake Erie. He also performed at popular comedy clubs in the Cleveland area.

“I had three business cards in my pocket for a while,” he says with a laugh. “I wasn’t sure what I wanted to be when I grew up…and I’m still not sure.”

As Kerry’s comedy and magic career took off, he phased out the engineering aspect…that is until he decided to build his own props to automate his show. Other magicians took notice and requested his illusions for their own acts.

“That business just started by accident. Now, I’m basically the go-to guy if it requires some crazy engineering,” he states. “I’m working other projects for David Copperfield. I’ve done a lot of stuff for Penn and Teller, Criss Angel…all of them.”

A lot of this “fun stuff” has been incorporated into the Pollock’s own club.

He has included the moving eyes in the Alexander poster on the wall, a floating deck of cards and a treasure chest exactly like the one NFL player Jon Dorenbos used during his magic act on “America’s Got Talent.”

While she doesn’t usually entertain the crowds from the stage (unless she’s serving as the BONK! Babe), Kelly is busy behind the scenes. She comes up with new promotional ideas, sources the local food and drink served in the club or on the floor each evening ensuring guests are enjoying the show.

Head over to the Hilton Head Comedy Magic Cabaret in South Island Square for “funny not filthy” entertainment the whole family will enjoy. Call 843-681-7757 or visit www.comedymagiccabaret.com for details and tickets.