Armadillos are more common in Texas, the Midwest and the deep South, but they have been moving northward into SC. 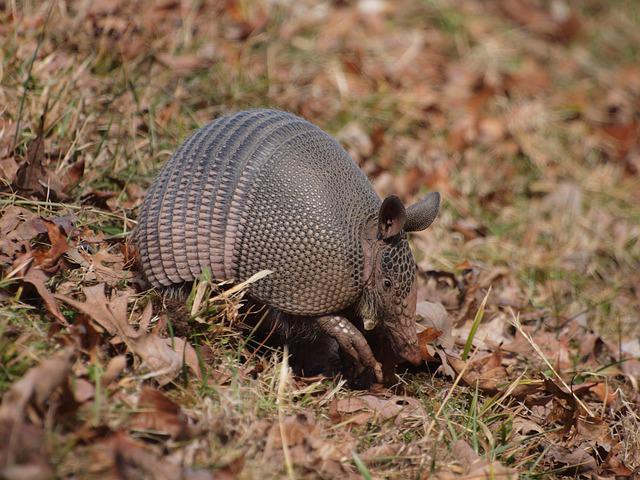 In SC, the nine-banded armadillo is the species that is most often found. This species has nine rings of armor around their body, as well as 12 rings around their tail. When they’re fully grown, they can weigh up to 17 pounds. Armadillos are characterized by a leathery armor shell and long, sharp claws for digging. They have short legs, but can move quite quickly. The average length of an armadillo is about 30″, including tail.

The diets of different armadillo species vary, but consist mainly of insects, grubs, and other invertebrates.  Some species, however, feed almost entirely on ants and termites. They are prolific diggers. Many species use their sharp claws to dig for food, such as grubs, and to dig dens. The nine-banded armadillo prefers to build burrows in moist soil near the creeks, streams, and marshes around which it lives and feeds.

Armadillos have very poor eyesight, and use their keen sense of smell to hunt for food. They use their claws for digging and finding food, as well as for making their homes in burrows. They dig their burrows with their claws, making them a pest to many home owners. If you have an unoccupied home or vacation property here on the Island, using a local Hilton Head home watch company can help keep them away.

Most species have rigid shields over the shoulders and hips, with a number of bands separated by flexible skin covering the back and flanks. Additional armor covers the top of the head, the upper parts of the limbs, and the tail. Soft skin and fur cover the underside of the animal. This armor-like skin appears to be an important defense for many armadillos, although most escape predators by fleeing.

When threatened by a predator, the nine-banded armadillo tends to jump straight in the air when surprised, so consequently often collides with the undercarriage or fenders of passing vehicles to its demise.

Armadillos have short legs, but can move quite quickly. The nine-banded armadillo moves well through water. It can walk underwater for short distances, holding its breath for as long as six minutes. To cross larger bodies of water, it is capable of increasing its buoyancy by swallowing air, inflating its stomach and intestines.

Armadillos are often used in the study of leprosy, since they are among the few known species that can contract the disease systemically.

They are particularly susceptible due to their unusually low body temperature, which is hospitable to the leprosy bacterium. Humans can acquire a leprosy infection from armadillos by handling them or consuming armadillo meat. Never expose yourself to blood or other fluids from these animals, and you should never touch them with bare hands. The CDC recommends contacting your healthcare provider, should you make contact. Your doctor will follow up with you over time and perform periodic skin examinations to see if you develop the disease. Therefore, just enjoy these unique creatures from afar.