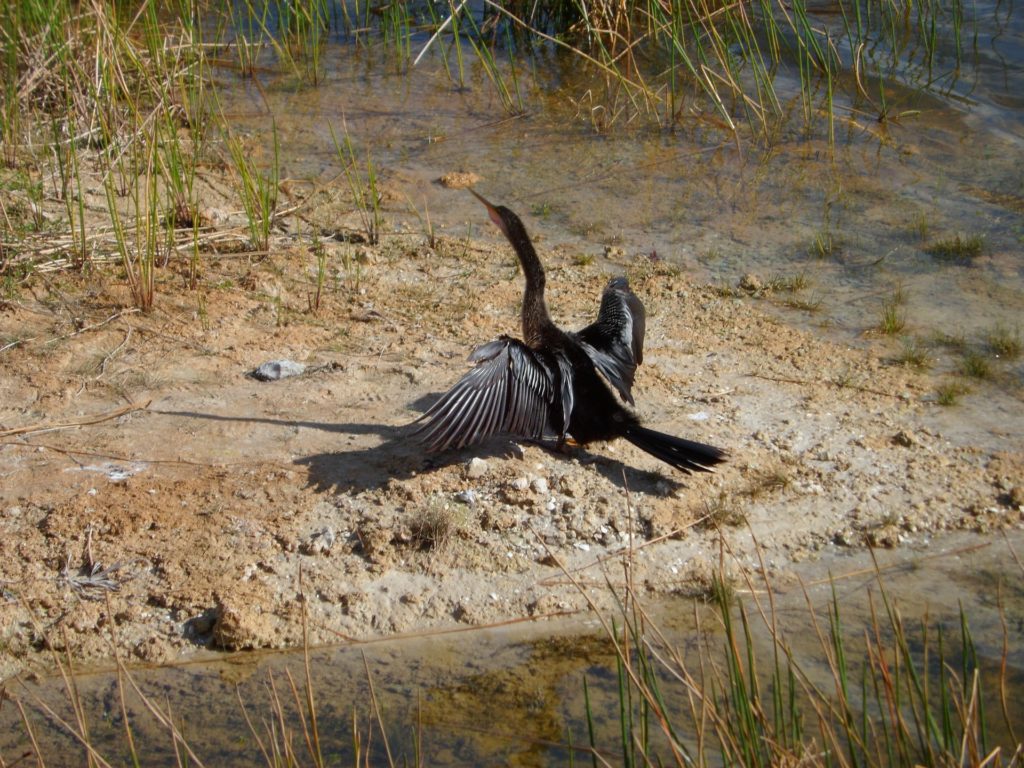 Have you seen something that looks like a snake, but also a bird, in the lagoons around Hilton Head?

Anhinga Anhinga is the scientific name for this diving bird commonly found on Hilton Head Island. It may also be called the Snake Bird, Water Turkey or even the North American Darter.

Diversely spread throughout tropical and subtropical climates, this bird is usually found in warm shallow waters; from the Americas across to Asia, Africa and Australia. The term Anhinga was derived from the Brazilian Tupi Language and means “Devil Bird” or “Snake Bird.”

These are diving birds that swim through the water in search of fish and amphibians to eat.

They use their feet to propel their bodies further into the water, while using their large tails as a rudder for direction. When the Anhinga is in the water and comes up for a breath of air, it is easy to see why it is called a Snake Bird. Only the head and the neck of the bird stick out of the water, appearing to be a snake about to strike.

The Anhinga uses its long pointy beak to stab prey in the water. Once they catch their prey, they return to the surface, where they commonly toss the food into the air and catch it in their mouth to eat it. These birds can stay underwater for a significant amount of time, often tricking those watching by popping out of sight.

You can commonly see the Anhinga on branches and bank sides with their wings outspread.

Once the Anhinga is done fishing, it is essential for it to dry out. The feathers can become water-laden, making them too heavy to fly. Unlike other waterfowl, the Anhinga does not have the uropygial gland that produces oil. This allows it to dive deeply into the water but makes it essential to dry out after a swim. You can tell an Anhinga has not fully dried off when you see it running across the surface of the water with wings flapping strenuously.

On Hilton Head Island, the Anhinga begins breeding from March to May.

The birds can be noted before breeding season by the beautiful neon green feathers around their eyes which both the males and females develop. The Anhinga nests in low-lying trees and bushes, along waterways. The males collect building materials and the females construct a nest of twigs lined with leaves. The female lays two to six eggs which incubate for 30 days. The chicks stay in the nest for about a month being cared for by both parents. Once they have fledged, they may stay around the nest for a few more months, getting acclimated to their new independence. The Anhinga will not mature until it is two years old.

The ancestors of Anhingas have been around for 50 million years. Many fossils were found in Brazil, where the diversity of Anhingas was the greatest.

With so many interesting and adaptable skills, it is no wonder that such a bird has continued to exist through millions of years.

Focusing on the wildlife and habitats of the South Carolina Lowcountry, the H2O Nature Center in Harbour Town features live reptile and amphibian exhibits, hands-on displays and more. Apparel, gifts, books and bicycle/fishing gear rentals are also available. To make reservations for the Alligator and Wildlife Tour with Master Naturalist Kathleen McMenamin, please call 843-686-5323. For details on other water activities offered by H2O Sports, visit www.h2osports.com.