In 2017, a group of Heritage Library Volunteers began outlining a research effort to document Hilton Head Island during the reconstruction period. 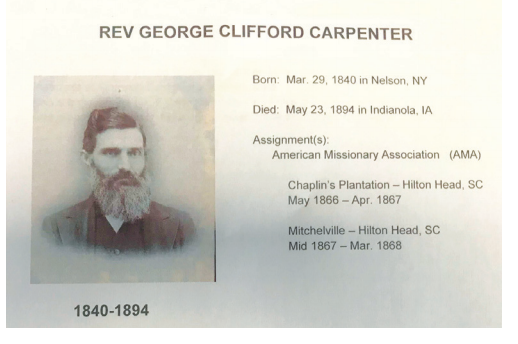 The first decision they made was to define the reconstruction era on Hilton Head as 1861 to 1890.  Normally the era is defined as the period between 1865 and 1876. Why did they pick those dates?

They chose 1861 because that is when the Union Army captured the Island and found themselves the sanctuary for thousands of “contraband” slaves. While scholars define the end of reconstruction as1876, we chose to extend to 1890 because the Island was isolated and life went on as it had until a white man, W. P. Clyde, came to the Island and began to purchase large tracts of land for hunting camps. That was the first sign that the Island had been “discovered” again.

With those dates in mind, they listed the most important events that would have affected the people living here.

The most important was the sale of land. Being able to purchase land became the hallmark of freedom. It enabled formerly enslaved residents to create their own lives. Sale of land was by far their largest project. An index, compiled by compiled by Lois Briggs, Steven Strandmark, Murray Christopher and Cameron Benson lists of all the Hilton Head deeds from 1863 to 1888.

This index of land purchases gave us an avenue to research the ancestry of our native islanders. Nancy Burke completed a comprehensive timeline of the various activities surrounding land sales. This included definitions of the terms, descriptions of the various Congressional Acts. These acts created the opportunities for government sales of land.  They identified the plantation landowners before the war and those who reclaimed their land later.

Early in January 1862, the first missionary educator, Bernard Lee, came to Hilton Head. She established the first school for the “contraband” slaves – a year before the Emancipation Proclamation.

The bulk of the missionaries started for Hilton Head in March 1862 at the request of Edward Pierce.

Pierce was an abolitionist. He brought a task force of northern abolitionist missionaries, doctors and educators to oversee the Port Royal community. Barbara Friis set out to find the teachers that served here. By the time she was finished, she identified and wrote stories of approximately 85 people who once taught on Hilton Head for part of their mission.

In the fall of 1862, the U. S. Army set aside a portion of what was Thomas Drayton’s Fish Haul Plantation. They provided materials for the former slaves to build their own village. The Village of Mitchelville was built with streets, quarter-acre lots, separate houses, a church, its own laws, compulsory education, and its own elected officials. The Library has a listing of over 700 identified residents of the village.

Most of the Island males, including the former slaves, worked for the Army.

Their jobs didn’t end when the war ended but lasted until the Army left in 1868. However, when it left, the jobs also left, and the residents either left the Island to find work, or turned to subsistence farming and fishing to maintain their way of life.

They collected the quartermaster records from 1861 – 1864 and Marie Danforth, Pixie Sudol and Priscilla Russo transcribed them. Many of the formerly enslaved residents were listed in those records and we already had the census listings from that period on our website. So, Marie Danforth and Karen Gobrecht performed a data analysis of these two listings to learn populations, ages, races, occupations, and birth places of the residents.

The data also gave theLibrary the information they needed for the comparison of occupations before and after the Army. The pension files of the U.S. Colored Troops collected by the Library and selectively printed in a book called They Served tell of the hardships the native islanders endured after the war. Rick Bart and Bob Blot researched and documented some of the prominent people who populated the Island during that time.

Those records are available at the Library and may ultimately be part of a larger project.

A comprehensive timeline of the reconstruction laws and events which constituted the Reconstruction Era has just been completed and added to the website as a broader picture of the events that may, or may not, have affected lives on Hilton Head Island. Visit the library website, https://heritagelib.org, click on History and Culture, and wander through the records of the Reconstruction Era on Hilton Head Island – fascinating information.