They have changed very little biologically in over 150 million years and were able to avoid extinction 65 million years ago when the dinosaurs met their demise. During the mid-1900s they were almost hunted to extinction, but today can be found in abundance throughout the Southeastern United States and are considered a species of little concern.

Only found within the United States, American Alligators, Alligator mississippiensis, belong to the greater family of Crocodilians which includes alligators, crocodiles, caymans and gharials.

Only two varietal species of alligator exist: the American alligator and the critically endangered Chinese alligator. Crocodiles are more commonly found throughout the world, however the only place to see this endangered species in the United States is in the Florida Everglades.

Great swimmers, alligators live in freshwater habitats such as ponds, lakes, rivers and swamps. They often swim hang out in the water or sun themselves on the sides of ponds and irrigational canals around Hilton Head. It is very uncommon to see them in salt water, but they can be found there on a few occasions. Alligators will enter salt water to cure algae and bacteria irritations in their skin and may also move through salt water as they travel from island to island looking for new habitats or mates. They have also been known to go into the salt water to hunt for food and then quickly return to their freshwater homes.

Most alligators are scared of humans; they will quickly hide underwater if they feel threatened. However, they are wild animals and can move very fast, so it is best to stay far away from them.

Alligators are cold blooded; meaning that the temperature outside determines their body temperature. During the winter months, their bodies shut down and they don’t eat for long periods of time and go into a dormancy until the weather warms up. Their body temperature must be at least 60°F for them to digest food and explains why alligator sightings are more common during the summer months. The best time to go looking for alligators during the summer is in the mornings and evenings. Similar to humans, they can overheat and prefer to spend hot days in the water or in their dens.

The American Alligator can grow up to 15 feet long and can weigh up to 1,000 pounds. Males generally grow larger than females. At birth, alligator babies are six inches long. They continue to grow up to a foot a year until they reach maturity. Around the age of seven, alligators begin to breed.  At that time, their growth rate slows down. An easy way to determine the length of an alligator is to count the inches between the nose bump and eye bump. That number translates into feet. They can live to be 50 years old.

Once an alligator has reached maturity, it will find an area to claim as its territory.

Territories usually consist of a dominant male and a number of different females, each living independently. They will then begin to build a den. Dens are open air cavities in the ground, usually with an underwater entrance. This decaying material in the ground helps to keep their body temperature regulated in both the summer and winter. 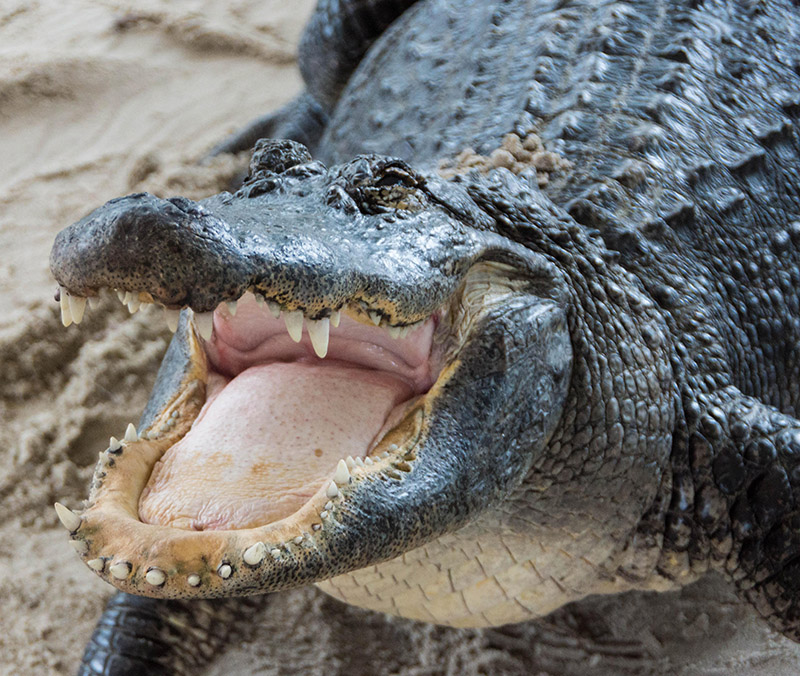 Alligators are definitely an apex predator. They will eat any animal, dead or alive, that they can get their jaws onto. Instead of chewing their food, they crunch down on it a few times and swallow it whole; this is partly why it takes them so long to digest their food. During the summer months, alligators eat about once every two weeks, depending on the size of the meal. The larger the meal, the less likely they will need to eat again in the near future.

H2O Sports, a great place to spark curiosity and inspire learning through adventure in all ages. To make reservations for the Alligator & Wildlife Tour, please call 877-290-4386. For details on other water activities, go to www.H2OSports.com.