Can background music affect the taste of wine? The latest research says yes! 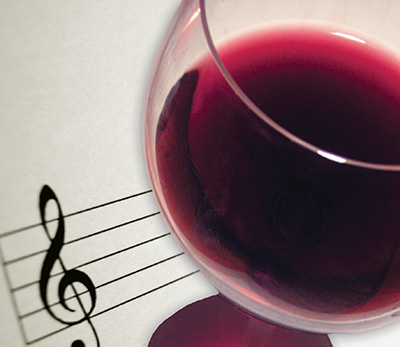 A growing body of scientific evidence shows that what people taste when evaluating a wine can be influenced by the music that happens to be playing at the same time.

It has long been known that what we hear can influence aspects of tasting. This is because out of all of our sensory organs, the tongue is the “dumbest,” meaning that all of our other senses (hearing, smell and sight) are more acute and strongly influence taste. When we eat a meal on a fancy place, full of elaborate place settings, fine porcelain, served by waiters wearing tuxedos with soft classical music playing, the food is going to taste different than if we ate the same food in a diner blaring pop music.

The latest research now shows that by playing the “right” music, one can also impact specific sensory-discriminative aspects of tasting, as well. Simply put, music influences the perceived acidity, sweetness, fruitiness and astringency in a wine.

In the latest study, Professor Adrian C. North of Edinburgh, Scotland gave taste tests to 250 students while playing music in the background.

Students were put into groups and given either a red wine or a white wine. Each group listened to one of four songs. The four songs were characterized as follows: powerful and heavy, subtle and refined, mellow and soft or zingy and refreshing.

The results showed that the music had a consistent effect on the participants’ perception of the wine.

They tended to think their wine had the qualities of the music they were listening to. So, for example, both the red and white wines were given the highest ratings for being powerful and heavy by those participants who drank them to the powerful and heavy tune.

Californian winemaker and wine consultant Clark Smith set up his own studies involving over 150 wines and 250 songs.

He summarizes his conclusions as follows: “Red wines need either minor key or they need music that has negative emotion. They don’t like happy music. With expensive reds, don’t play music that makes you giggle. Pinots like sexy music. Cabernets like angry music. It’s very hard to find a piece of music that’s good for both Pinot and Cabernet.”

“Never play polkas with anything,” he says, unless you really like White Zinfandel.

Open up a bottle, crank up the tunes and see if you agree.

Written by Georgene Mortimer, owner of Island Winery on Cardinal Road. Store and tasting hours are Monday through Saturday from 12:30 p.m.-5:30 p.m. For more information about Island Winery, call 843-842-3141 or click here to visit their website